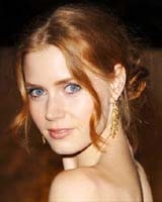 Amy Lou Adams is an American actress. She began her performing career on stage in dinner theaters before making her screen debut in the 1999 film Drop Dead Gorgeous. After a series of TV guest appearances and roles in B movies, she landed the role of Brenda Strong in 2002's Catch Me If You Can; but her breakthrough role was in the 2005 independent film Junebug, playing Ashley Johnsten, for which she received critical acclaim and an Academy Award nomination.

Adams subsequently starred in Disney's 2007 film Enchanted, which was a financial and critical success, and received a Golden Globe Award nomination for her performance as Giselle. She received her second Golden Globe Award nomination the following year for her role as a young nun named Sister James in Doubt. Though she has appeared in a range of dramatic and comedic roles, Adams has gained a reputation for playing characters with cheerful and sunny dispositions.

Amy Adams was born in Vicenza, Italy, the fourth of seven children of American parents Kathryn (née Hicken) and Richard Adams. She has four brothers and two sisters. Her father, a U.S. serviceman, was stationed in Italy at the time of her birth, and took the family from base to base before settling in Castle Rock, Colorado, when she was eight or nine years old.

Thereafter, her father sang professionally in restaurants, while her mother was a semi-professional bodybuilder. Adams was raised as a Mormon, although her family left the church after her parents' divorce when she was 11 years old. Regarding her religious upbringing, she said, "... it instilled in me a value system I still hold true. The basic 'Do unto others...' — that was what was hammered into me. And love."

Throughout her years at Douglas County High School, she sang in the school choir and trained as an apprentice at a local dance company with ambitions of becoming a ballerina. Her parents had hoped that she would continue her athletic training, which she gave up to pursue dance, as it would have given her a chance to obtain a college scholarship.

Adams later reflected on her decision not to go to college. After graduating from high school, she moved to Atlanta with her mother. Deciding that she was not gifted enough to be a professional ballerina, she entered musical theater, which she found was much better suited for her personality. To support herself while performing in community theater, Adams worked at Gap as a greeter.

She took her first full-time job as a hostess at Hooters, a fact that became her "entire press career" for a while. Upon turning 18, she worked as a Hooters waitress and left three weeks later after having saved enough money to buy her first car.

She began working professionally as a dancer at Boulder's Dinner Theatre and Country Dinner Playhouse, where she was spotted by a Minneapolis dinner theater director, Michael Brindisi, in 1995. Adams relocated to Chanhassen, Minnesota and worked at the Chanhassen Dinner Theatres for the next three years.

While she was off work nursing a pulled muscle, she auditioned for the satirical 1999 comedy Drop Dead Gorgeous, which was being filmed in Minnesota, and was cast in her first film role. Persuaded by her Drop Dead Gorgeous co-star, Kirstie Alley, Adams moved to Los Angeles, California in January 1999.

Describing her first year there as her "dark year" and "bleak", she recalled that she would "pine for that time" at Chanhassen because she "really loved that security and schedule", and said, "The people I worked with there were also a great family to me." Shortly after arriving in Los Angeles, she was cast in Fox Network's television series spin-off of Cruel Intentions, Manchester Prep, in the role of Kathryn Merteuil.

The series did not live up to the network's expectations and following numerous script revisions and two production shutdowns, it was canceled. The filmed episodes were then re-edited to be released as the direct-to-video film, Cruel Intentions 2.

From 2000 to 2002, Adams appeared in a series of small films like Psycho Beach Party while guest-starring on television series such as Charmed, Buffy the Vampire Slayer, Smallville and The West Wing. She then appeared in Steven Spielberg's Catch Me If You Can as Brenda Strong, a nurse whom Frank Abagnale Jr (played by Leonardo DiCaprio) falls in love with.

In 2004, she starred in The Last Run as well as voicing characters on the animated television series King of the Hill. She was also cast a regular in the television series, Dr. Vegas, in the role of Alice Doherty but was later fired after a contract dispute.

Prior to leaving Dr. Vegas, she had received the script for a low-budget independent film named Junebug and auditioned for the role of Ashley Johnsten, a young, cheerful and talkative pregnant woman. Director Phil Morrison explains his decision to cast Adams: "Lots of people looked at Ashley and thought, 'What's the sorrow she's masking?' To me, the fact that Amy didn't approach it from the angle of 'What's she covering up?' was key."

The film was shot in 21 days in Winston-Salem, North Carolina. During that time, Adams turned 30 years old and was worried about her film career. She said, "I thought maybe I should move to New York, maybe I should do something else. It wasn't that I was quitting or making a dramatic statement. It was more like maybe this just wasn't a good fit."

On the experience of making Junebug, Adams said, "It was really empowering. At the end of the summer I was unemployed but I was happy and I was proud. I was like, you know what, I'm done with being pushed around." Junebug premiered at the 2005 Sundance Film Festival with Adams winning a Special Jury Prize for her performance.

After the theatrical release of The Wedding Date, in which Adams appeared alongside Debra Messing and Dermot Mulroney, Junebug was released in theaters by Sony Pictures Classics. Adams earned critical accolades for her work in Junebug; Carina Chocano of Los Angeles Times noted, "Adams' performance in a role that could have easily devolved into caricature is complex and nuanced."

Meanwhile, Joe Leydon of Variety commented, "Partly due to her character's generosity of spirit, but mostly due to her own charisma, Adams dominates pic with her appealing portrayal of a nonjudgmental optimist savvy enough to recognize the shortcomings of others, but sweet enough to offer encouragement, not condemnation".

She received several awards for Best Supporting Actress including the National Society of Film Critics award and the Independent Spirit Award. She was also nominated for a Screen Actors Guild Award and an Academy Award. The Academy of Motion Picture Arts and Sciences invited Adams to become a member in 2006.

Although Junebug had a limited audience, Adams' critically-acclaimed performance in the film helped to increase interest in her acting career. Adams went on to appear in films like Standing Still and Talladega Nights: The Ballad of Ricky Bobby, and played the recurring guest role of Katy on the television series The Office.

Adams was amongst 300 or so actresses who auditioned for the role of Giselle, but she stood out to director Kevin Lima because her "commitment to the character, her ability to escape into the character's being without ever judging the character was overwhelming".

Enchanted was a commercial success, grossing more than $340 million worldwide. Her performance was well received by the critics, with Todd McCarthy of Variety describing Enchanted as a star-making vehicle for Adams the way Mary Poppins was for Julie Andrews.

Following Enchanted, Adams appeared in Charlie Wilson's War as the title character's administrative assistant, co-starring with Tom Hanks, Julia Roberts, and Philip Seymour Hoffman. On the experience of making the film, Adams said, "It was so much fun. Just to be on that set and learn from these people and get to watch Philip Seymour Hoffman and Tom Hanks do these amazing scenes together, directed by Mike Nichols, it was for me like going to school."

The success of Enchanted increased Adams' media exposure during the 2007–08 film awards season. At the 80th Academy Awards ceremony, she performed "Happy Working Song", one of the nominated songs from Enchanted, live on stage. "That's How You Know", originally performed by Adams in the film, was sung by Kristin Chenoweth at the ceremony.

In an interview, Adams remarked that the song was "perfect" for Chenoweth since Chenoweth "was a huge inspiration for how  approached Giselle". As well as appearing on the covers of Interview, Elle and the Hollywood issue of Vanity Fair, which named her as one of the "10 fresh faces of 2008", Adams hosted the seventh episode of the 33rd season of Saturday Night Live in March 2008.

In the episode, she played various characters, including Heidi Klum as well as singing "What is This Feeling?" from Wicked in a mock battle with SNL cast member Kristen Wiig during the opening monologue.

Adams' next project was Sunshine Cleaning, an independent film shot in and around Albuquerque, New Mexico, from February to March in 2007. She played a single mother who starts her own crime scene clean-up business in order to make enough money to send her son to a private school. The film premiered at the 2008 Sundance Film Festival as one of the most anticipated titles, but received mixed reviews and wasn't sold to a distributor as quickly as expected. Its theatrical release was scheduled for 2009.

Her first theatrically released film of 2008 was the 1939-set film Miss Pettigrew Lives for a Day, in which she plays Delysia Lafosse, an aspiring American actress living in London whose life is changed after meeting a governess named Miss Pettigrew, played by Frances McDormand.

While the film received generally favourable reviews, Adams' role was noted to be similar to her joyful and naïve characters in Junebug and Enchanted. Carina Chocano of Los Angeles Times stated that "Adams is amazingly adept at playing smart playing dumb". Similarly, Kirk Honeycutt of The Hollywood Reporter wrote that "Adams more or less reprises her princess from Enchanted, only with a beguiling touch of ditzy naughtiness".

In late 2008, Adams starred in Doubt, an adaptation of John Patrick Shanley's play of the same name, as Sister James alongside Meryl Streep, Philip Seymour Hoffman and Viola Davis. After being informed of the project by her Sunshine Cleaning co-star, Emily Blunt, Adams pursued the role of Sister James but was told that it had already been offered to another actor.

The film was well-received by the critics, while Adams' role was noted to be the "least-showy" among the four major parts. Though her performance was criticized by Manohla Dargis of The New York Times as "unsteady", Todd McCarthy of Variety commented that "Adams does all anyone could with the role of a nice young nun".

In 2009, Adams portrayed Amelia Earhart in Night at the Museum 2: Battle of the Smithsonian. She then appeared in Julie & Julia as a frustrated temp secretary, Julie Powell, who decides to cook all of the recipes in Julia Child's Mastering the Art of French Cooking. Her other film projects include Leap Year, Daughter of the Queen of Sheba, and an adaptation of Adena Halpern's novel The Ten Best Days of My Life.

Adams was engaged to her boyfriend of six years, actor and artist Darren Le Gallo. She met Le Gallo in 2001 in an acting class. Since she was "really focused" in class, he initially thought that she was "like Tracy Flick in Election". About a year after they met, Adams and Le Gallo acted together in a short film called Pennies over one weekend, during which they became better acquainted with each other and they started dating shortly thereafter. And they got married in the year 2015.