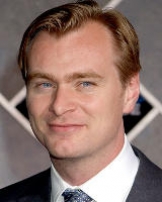 Christopher Jonathan James Nolan is a British-American film director, writer  and producer. He is best known for directing the psychological thriller Memento and for reviving the Batman film franchise, for which he has received considerable acclaim.

He often collaborates with his brother, screenwriter Jonathan Nolan, and recently with actors Christian Bale and Michael Caine. Nolan is the founder of the production company Syncopy Films and is a dual citizen of the United Kingdom and the United States.

Nolan was born in London, the son of an English father who worked as an advertising copywriter and an American mother who was a flight attendant. He spent his childhood in both London and Chicago. Nolan found an interest in botany and "dicots" early on until he found his father's camera. He began film-making at the age of seven using his father's Super 8 camera and his toy action figures. While living in Chicago as a child, he also made short films with future director and producer Roko Belic. The film which influenced him in his youth, he says,[citation needed] was Ridley Scott's Blade Runner which he admired for its visual complexity.

Nolan was educated at Haileybury College, an independent school at Hertford Heath in Hertfordshire, England, and later studied English literature at University College London while filming several short films in the college film society. The first, Tarantella, was shown in 1989 on Image Union, an independent film and video showcase featured on PBS. A second short film, Larceny, was shown during the 1996 Cambridge Film Festival. Another notable short film was called Doodlebug with Jeremy Theobald who later starred in Following.

Nolan directed his first feature film, Following, in 1996. The film depicts a writer who is obsessed with following random people. Scenes are shown out of chronological order, and as such the viewer becomes disoriented; having to deduce the elements of the story in the same way as the protagonist calculates what is going on around him. Nolan made the film for just $6,000. He shot it on weekends, over the course of a year, working with friends he had met at the University College London film society. It began to receive notice after premiering at the 1998 San Francisco Film Festival, and was eventually distributed on a limited basis by Zeitgeist in 1999.

As a result of the film's success, Newmarket Films optioned the script for Nolan's next film, Memento. Memento (2000) is a critically acclaimed cult film and was nominated for both a Golden Globe and an Academy Award (Oscar) for best screenplay.

The movie is based on the short story Memento Mori, written by Christopher's brother, Jonathan Nolan. It follows widower Leonard Shelby (played by English-born Australian actor Guy Pearce) who suffers a head injury and is unable to form new memories. What distinguishes the film[citation needed] is Nolan's technique of presenting events partially in reverse-chronological order and then in chronological order.

Using this technique, Nolan forces viewers into the mentally-impaired protagonist's position — also encountering disoriented events. Nolan had developed this cutting edge technique in Following. The latter, however, presents a structure in which the three acts are cut together, whereas Memento  presents two linear timelines — the primary one running backwards, and an entirely previous timeline running forwards — which are cut together and which meet at the end. This crossing-over is signified by the transition from black and white film stock to color as the timeline transitions from forwards to backwards.

In 2002, Nolan directed Insomnia, an American remake of the 1997 Norwegian film of the same name, albeit with major changes in both the plot and the nature of the main character. The plot involves two detectives brought to Alaska to assist local authorities in locating a killer. However, the search occurs during the "sunny" season in Alaska, and the film's protagonist, played by Al Pacino, is unable to sleep because of the constant daylight.

His sleepless "nights" lead to bad decisions and Nolan's characteristic confusion, for both the protagonist and the viewer. The film also starred Robin Williams and Hilary Swank. The movie was praised by critics as a rare case of a well-done American remake of a European film.

In 1997, Warner Bros Pictures put its Batman film franchise on an indefinite hiatus when the fourth installment, Batman & Robin, was released to negative reviews and disappointing box office. Nolan had said that while he was content with his directing résumé, he had always dreamed of directing a blockbuster. He created his opportunity in 2003 when, together with Blade screenwriter David S. Goyer, he convinced Warner Bros. to take the risk of entrusting the first of a revived Batman film series to a relatively unknown director. The actor selected to play the leading role, Christian Bale, was a favorite choice among movie fans due to his work in movies such as American Psycho and Equilibrium.

Batman Begins was released on 15 June 2005 and became a box office hit, ranking as the eighth highest grossing film of 2005 domestically and the ninth highest grossing worldwide. It received a very positive critical and public reception, with many ranking it as superior to Tim Burton's 1989 Batman film, for instance receiving, according to Rotten Tomatoes, an overall 85% positive review compared to 71% for Burton's film. Strengths of the movie included its dark and intelligent storyline, strong emphasis on character, and the predominant themes of fear and duality.

The Prestige, released on 20 October 2006, is an adaptation of the Christopher Priest novel about two rival magicians in the 19th century. It reunites Nolan with Batman Begins stars Christian Bale and Michael Caine. Hugh Jackman, Scarlett Johansson, and David Bowie also star. The movie had a mostly positive response from critics and made over $109 million worldwide. The film was co-scripted by his brother, Jonathan Nolan and co-produced with his wife, Emma Thomas.

In the months following The Prestige's release, Nolan made numerous comments suggesting that he would return to direct the sequel to Batman Begins. In late July 2006, the sequel was officially confirmed as The Dark Knight with Nolan at the helm and Heath Ledger joining the cast as The Joker, Batman's arch-enemy.

Actress Katie Holmes, who played the hero's romantic interest in Begins, had been replaced by Maggie Gyllenhaal, whose brother Jake Gyllenhaal auditioned for the role of Bruce Wayne/Batman in 2003. Aaron Eckhart, who was considered to be the leading role in Memento, plays Harvey Dent/Two-Face. Nolan and his brother Jonathan wrote a script, based on a treatment written by himself and David S. Goyer.

The film began production in early 2007 and was released on 16 July 2008 in Australia and 18 July 2008 in the United States, to overwhelming critical acclaim with some critics calling it the greatest comic-book based movie ever made. It also had enormous box office success, setting the record for the highest-grossing weekend opening in the U.S. with over $158 million and becoming the 2nd highest grossing film of all time domestically, and the fourth-highest worldwide at the time (both unadjusted for inflation), it has since been surpassed by Avatar on both markets.