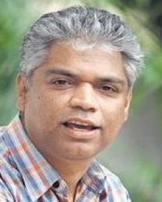 Prakash Belawadi is an Indian theater, film, television and media personality, an activist and a journalist from Bangalore. He co-founded the Centre for Film and Drama and launched the Suchitra School of Cinema and Dramatic Arts, both in Bangalore, the latter in 2012.

Belawadi was born into a family of theatre artistes in Bangalore, in the erstwhile Mysore State (now Karnataka). His father, Make-up Nani (1929–2003), was popular personality in Kannada theatre, who also appeared in films, and worked as a make-up artist alongside. His mother, Bhargavi, also worked as a theatre artiste. His siblings Sujata, Sudha and Pradeep were involved in theatre as well.