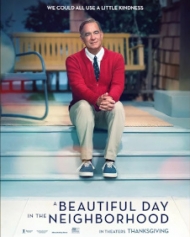 A Beautiful Day In The Neighborhood

A Beautiful Day in the Neighborhood is an American drama movie starring Tom Hanks in the lead role. Marielle Heller directed this flick and is distributed by  Sony Pictures worldwide. It narrates the story of famed Television icon Fred Rogers. It had its world premiere at the Toronto International Film Festival on September 7, 2019.

Plot: Tom Hanks takes on the role of Mr Rogers, who helps an award-winning but cynical Esquire journalist to take a new approach towards his toxic relationship with dying father.