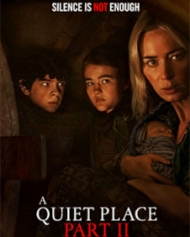 A Quiet Place Part II is an American horror film directed by John Krasinski under Paramount Pictures Banner. It is a sequel to the 2018 film A Quiet Place. Emily Blunt, Millicent Simmonds and Noah Jupe reprise their roles and Cillian Murphy & Djimon Hounsou joins the cast. It will stream on Paramount+.
The film follows the story of a family who is forced to go out of their home and search for some shelter in a post-apocalyptic world tormented by blind monsters with an acute sense of hearing. How the Abbot family survives these creatures who already killed most of the earth population forms the rest of the plot.