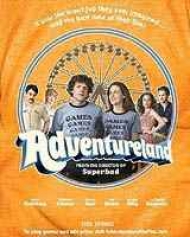 Comedy
Release Date : 2009 (India)
27 Mar 2009 (WorldWide)
Cast : Jesse Eisenberg, Kristen Stewart
Director : Greg Mottola
Synopsis
Adventureland is the about James Brennan (Eisenberg) who has just graduated college and it's the summer of 1987.James is all set to embark on his dream tour of Europe when his parents (Wendie Malick and Jack Gilpin) suddenly announce that they won't be able to subsidize the trip. Now the only things James has to look forward to this summer are sugar-fueled children, belligerent dads, and an endless parade of giant stuffed animals. When James strikes up a relationship with captivating co-worker Em (Stewart), however, he finally starts to loosen up. Suddenly, the worst summer ever doesn't seem quite so bad.