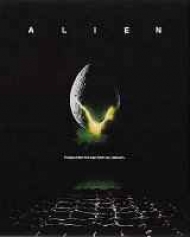 Sci - Fi
Release Date : 1979 (India)
25 May 1979 (WorldWide)
Cast : Tom Skerritt, Sigourney Weaver
Director : Ridley Scott
Synopsis
Alien film's title refers to its primary antagonist: a highly aggressive extraterrestrial creature which stalks and kills the crew of a spaceship. When commercial towing vehicle Nostromo, heading back to Earth, intercepts an SoS signal from a nearby planet, the crew are under obligation to investigate. After a bad landing on the planet, some crew members leave the ship to explore the area.

At the same time as they discover a hive colony of some unknown creature, the ship's computer deciphers the message to be a warning, not a call for help. When one of the eggs is disturbed, the crew do not know the danger they are in until it is too late.