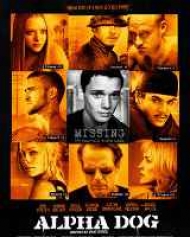 Crime
Release Date : 2007 (India)
27 Jan 2007 (WorldWide)
Cast : Emile Hirsch, Justin Timberlake
Director : Nick Cassavetes
Synopsis
Alpha Dog movie is based on the life of Jesse James Hollywood, a drug dealer who became one of the youngest men ever to be on the FBI's most wanted list.

Johnny Truelove likes to see himself as tough. He's the son of an underworld figure and a drug dealer. Johnny also likes to get tough when things don't go his way. When Jake Mazursky fails to pay up for Johnny, things get worse for the Mazursky family, as Johnny and his 'gang' kidnap Jake's 15 year old brother and holds him hostage. Problem now is what to do with 'stolen boy?'