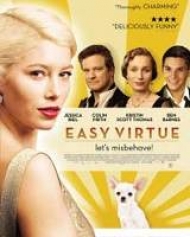 U/A | Comedy Romance
Release Date : 2010 (India)
07 Mar 2010 (WorldWide)
Cast : Jessica Biel, Ben Barnes
Director : Stephan Elliott
Synopsis
Easy Virtue is a social comedy film based on Noel Coward's play of the same name. A young Englishman marries a glamorous American. When he brings her home to meet the parents, she arrives like a blast from the future - blowing their entrenched British stuffiness out the window.

Between world wars, the Whittaker's estate is sinking; only the iron will of Mrs. Whittaker staves off bankruptcy while she awaits her son John's return from the continent. To her dismay, he brings a bride: an American widow who races cars.

The bride, Larita, thinks she and John will visit and then go to London, where he'll work and she'll race. But John is to the manor born, and mother is nothing if not a master at plans and manipulation.

Soon it's all-out war between mother and...