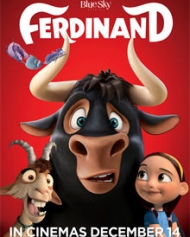 1 hrs 48 mins | Animation Comedy
Release Date : 15 Dec 2017 (India)
15 Dec 2017 (WorldWide)
Cast : John Cena, Kate McKinnon
Director : Carlos Saldanha
Synopsis
Ferdinand is a animated comedy movie directed by Carlos Saldanha and produced by Blue Sky Studios and 20th Century Fox Animation.
Ferdinand (John Cena) is a Spanish Fighting Bull who prefers smelling the flowers and practicing non-violence rather than chasing red cloths held by matadors in arenas. But when disaster comes to him, he is taken to a fighting stadium, and Ferdinand needs to decide if he is a fighting bull or a flower smelling, generous bull, in order to earn his freedom.