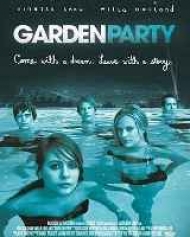 Drama
Release Date : 2008 (India)
11 Jul 2008 (WorldWide)
Cast : Vinessa Shaw, Willa Holland
Director : Jason Freeland
Synopsis
Garden Party centers on the story of 15-year-old April. She is running from one bad situation into another, hoping to find an answer that doesn't involve taking off her clothes.

As April navigates Los Angeles, she falls in with a group of confused kids struggling to chase their dreams. The black widow at the center of this web is a sexy, pot-dealing realtor named Sally St. Clair. Anyone who gets too close falls victim to her kinky entanglements. For some it goes bad, for other worse. -Lookout Films