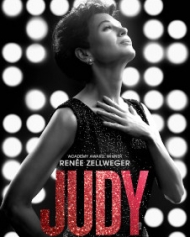 U/A | 2 hrs 0 | Biography Drama
Release Date : 2020 (India)
24 Jan 2020 (WorldWide)
Cast : Renee Zellweger, Finn Wittrock
Director : Rupert Goold
Synopsis
Judy is a biographical drama directed by Rupert Goold. It is based on the life famous American singer and actress Judy Garland. Renee Zellweger essays the titular character.
Plot: The film follows Judy Garland during the last year of her life, as she relocated her stage career to Britain, in an attempt to make money and win her children's custody back. While she found initial success with sell-out concerts at the Talk of the Town in London, eventually the situation worsened due to health issues.