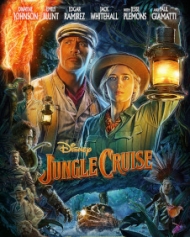 1 hrs 30 mins | Adventure Fantasy
Release Date : 2021 (India)
30 Jul 2021 (WorldWide)
Cast : Dwayne Johnson, Emily Blunt
Director : Jaume Collet-Serra
Synopsis
Jungle Cruise is an American fantasy adventure film starring Dwayne Johnson and Emily Blunt in lead roles. This film is based on Walt Disney's theme park attraction of the same name. While Jaume Collet-Serra directed the movie, Dwayne Johnson co-produced it.
In the early 20th century, there was a Tree Of Life in a jungle that had healing powers. Frank, the riverboat captain joins with his brother and a scientist Dr Lily and takes the mission to find out this special tree. And the trio must face many odds in the wild before they accomplish their mission.