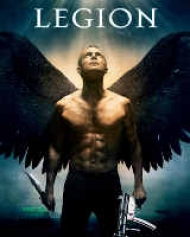 This time using angels as the act of Biblical judgment, God's wrath descends on Earth to exterminate the world's population. In a desperate, last-chance gambit, Michael leads a group of strangers to a small, New Mexico diner to protect a young waitress who may be pregnant with Christ in his second coming.