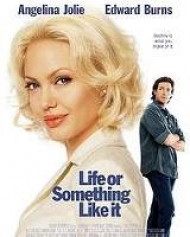 Instead, Prophet Jack not only predicts the football score, and that it would hail the next day, but also that she would die in seven days. When his first two prophecies turn out to be correct, Kerrigan panics and is forced to reevaluate her life.

The remainder of the storyline, which runs for the week of the prophecy, revolves around her attempts at introspection.

She seeks consolation in her boyfriend, and in her family, but finds little there. Her lifelong ambition, that of appearing on network television...