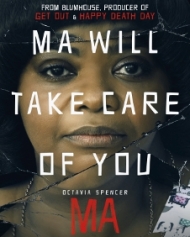 Ma is a psychological horror movie directed by Tate Taylor. And it stars Octavia Spencer, Juliette Lewis, Diana Silves, Luke Evans, Mckaley Miller in prominent roles. Universal Pictures released this film on May 31, 2019, in the United States.
A lonely woman Erica befriends a group of teenagers and allow them to party inside her house. Just when kids began to think that they hit a jackpot, strange things start to happen which makes them to think about the intention of their host.