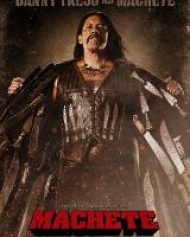 Action Thriller
Release Date : 2010 (India)
03 Sep 2010 (WorldWide)
Cast : Danny Trejo, Michelle Rodriguez
Director : Ethan Maniquis
Synopsis
Machete is a renegade former "Mexican Federale". He roams the streets of Texas after a shakedown from drug lord Torrez. Benz, a spin doctor, tells Machete that McLaughlin, a corrupt senator, is sending hundreds of illegal immigrants out of the country and that he must be killed.

He offers him $150,000 to kill McLaughlin. Attempting to assassinate the senator, Machete is double-crossed and is shot in the neck. Now on the run and being tracked by Sartana, a U.S. Immigration and Customs Enforcement agent with a special interest in the blade slinger, Machete goes after Benz and his men with the help of his "holy" brother Padre, a saucy meat cleaver-wielding taco slinger named Luz, and April, a socialite with a penchant for guns.