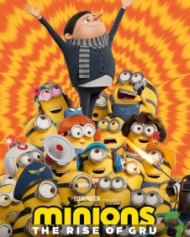 Minions: The Rise Of Gru

Minions: The Rise Of Gru Story

Minions: The Rise of Gru is a computer-animated comedy film produced by Illumination animation studio. It is a sequel to the 2015 flick Minions and the fifth film in the Despicable Me franchise. The film was released on July 1, 2022.
Plot
An eleven-year-old Gru wants to become a supervillain. His dream comes true when he receives an audition invitation from a well-known criminal organisation, Vicious 6. Gru's interview goes poor, and he is ridiculed for his young age. However, much surprise to Vicious 6, Gru steals the most sought Zodiac stone and escapes with Kevin, Bob and Stuart. Here starts all chase and action.

Minions: The Rise Of Gru Cast

Minions: The Rise Of Gru Crew