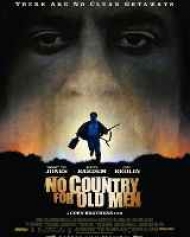 No Country For Old Men

Crime
Release Date : 2007 (India)
21 Nov 2007 (WorldWide)
Cast : Tommy Lee Jones, Javier Bardem
Director : Ethan Coen
Synopsis
No Country for Old Men story begins when Llewelyn Moss (Brolin) finds a pickup truck surrounded by a sentry of dead men. A load of heroin and two million dollars in cash are still in the back. When Moss takes the money, he sets off a chain reaction of catastrophic violence that not even the law - in the person of aging, disillusioned Sheriff Bell (Jones) - can contain.

As Moss tries to evade his pursuers - in particular a mysterious mastermind who flips coins for human lives (Bardem) - the film simultaneously strips down the American crime drama and broadens its concerns to encompass themes as ancient as the Bible and as bloodily contemporary as this morning's headlines.