X
#Filmibeat: Best Of 2018. Hurry up & vote!
Vote Now!
Home » Hollywood»Movies»Pirates of the Caribbean: The Curse of the Black Pearl 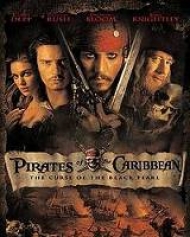 Pirates Of The Caribbean: The Curse Of The Black Pearl

Action Thriller
Release Date : 2003 (India)
15 Aug 2003 (WorldWide)
Cast : Johnny Depp, Geoffrey Rush
Director : Gore Verbinski
Synopsis
Pirates of the Caribbean: The Curse of the Black Pearl is a 2003 adventure film, based on the Pirates of the Caribbean ride at Disney theme parks. This swash-buckling tale follows the quest of Captain Jack Sparrow, a savvy pirate, and Will Turner, a resourceful blacksmith, as they search for Elizabeth Swann.

Elizabeth, the daughter of the governor and the love of Will's life, has been kidnapped by the feared Captain Barbossa. Little do they know, but the fierce and clever Barbossa has been cursed.

He, along with his large crew, are under an ancient curse, doomed for eternity to neither live, nor die. That is, unless a blood sacrifice is made.

When Captain Barbossa sends his pirate crew to kidnap Elizabeth Swan and the last remaining piece of Aztec gold....