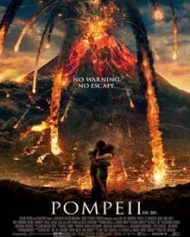 A | Action
Release Date : 2014 (India)
21 Feb 2014 (WorldWide)
Cast : Kit Harington, Carrie-Anne Moss
Director : Paul W.S. Anderson
Synopsis
Pompeii is an amercan action - adventure movie direction by Paul W.S. Anderson.
Story Line
Set in 79 A.D., POMPEII tells the epic story of Milo, a slave turned invincible gladiator who finds himself in a race against time to save his true love Cassia, the beautiful daughter of a wealthy merchant who has been unwillingly betrothed to a corrupt Roman Senator.
As Mount Vesuvius erupts in a torrent of blazing lava, Milo must fight his way out of the arena in order to save his beloved as the once magnificent Pompeii crumbles around him.
Verdict :An epic love tale set in the times when once magnificent Pompeii comes down crumbling.