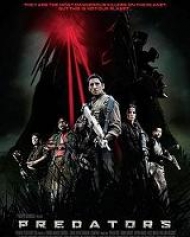 He is released onto an alien planet—which acts as a game reserve—along with seven other humans, who with the exception of a disgraced physician, are all cold-blooded killers consisting of mercenaries and convicts.

Royce reluctantly leads the group of elite warriors as they come to realize they have been brought together to this planet as prey for a new breed of Predator.

While battling to survive against these creatures, they come across an American soldier known as Noland who was brought to the planet years ago as game, but has managed to survive by hiding from the Predators in a cave....