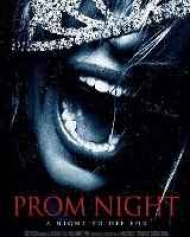 Horror
Release Date : 2008 (India)
25 Jul 2008 (WorldWide)
Cast : Brittany Snow, Scott Porter
Director : Nelson McCormick
Synopsis
Prom Night movie is a re-imagining of a 1980 Canadian horror film of the same name. In Bridgeport, the deranged high school teacher Richard Fenton is obsessed by the teenager student Donna Keppel; she witnesses him murder her family to stay with her, but Richard is arrested and sent to prison for life.

Three years later, the traumatized Donna is feeling better but is still under psychological treatment and taking pills. On her prom night, she goes with her boyfriend Bobby and two couples of friends to the Pacific Grad Hotel for the party. But the psychopath Richard has escaped from prison and is lodged in the same floor in the hotel chasing Donna, stabbing her friends and staff of the hotel that cross his path.