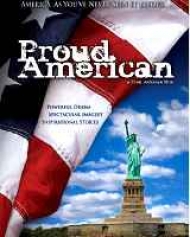 Drama
Release Date : 2008 (India)
12 Sep 2008 (WorldWide)
Cast : Hayley Chase, Cecelia Antoinette
Director : Fred Ashman
Synopsis
Proud American is a movie that is a blend of bio-pic, drama, and documentary released by Slowhand Cinema in both conventional 35mm and IMAX format. It features five stories that intend to capture the essence of the American spirit, two of them chronicling the founding of Wal-Mart and Coca-Cola.

The film holds the distinction of having obtained additional funding through overt sponsorship of the two companies, as well as MasterCard and American Airlines, whose product placement can be observed throughout the film.

Proud American presents five powerful singular stories all of which magnify the themes mentioned above. Our film is an emotional,...