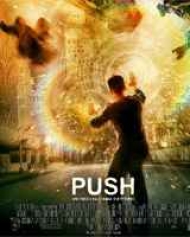 They must utilize their different talents and band together for a final job enabling them to escape the agency forever.

In Hong Kong, the "mover" Nick Gant is contacted by the "watcher" Cassie Holmes to seek out the "pusher" Kira Hollies. She has just escaped from the Division, a shadowy governmental agency that chases the youngsters with abilities.

When the trio is reunited, they join to other persons with ability to fight against the "pusher" Henry Carver and his men.