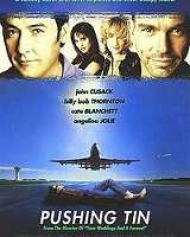 Comedy
Release Date : 1999 (India)
23 Apr 1999 (WorldWide)
Cast : John Cusack, Billy Bob Thornton
Director : Mike Newell
Synopsis
Pushing Tin is a comedy-drama film. Nick and the other boys (and Vicki Lewis) working the hotspot of air traffic control in New York are impressed with themselves, to say the least. They thrive on the no-room-for-error, fast-paced job and let it infect their lives.

The undisputed king of pushing tin, "The Zone" Falzone, rules his workplace and his wedded life with the same short-attention span that gets planes where they need to be in the nick of time.

That is, until Russell Bell, a new transfer with a reputation for recklessness but a record of pure perfection shatters the tensely-held status quo. The game of one-upmanship between the two flies so high as to lead Nick into Russell's bed with his wife.

His sanity slipping just as fast as his...