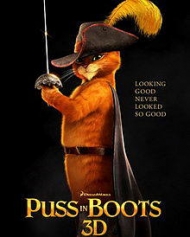 A gathering of old pub assassinates tells Puss that two dangerous mobsters named Jack and Jill have come across an ancient power that can shatter the world.

This is the time when Puss gets off to a campaign with his old friend Humpty Dumpty who also introduces him to Kitty Softpaws, a sly black cat who shows interest in Puss's journey. With his new sidekicks, Puss sets off on his most adventurous and dangerous journey he ever had before.