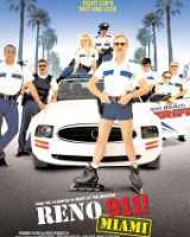 Action Comedy
Release Date : 2007 (India)
23 Feb 2007 (WorldWide)
Cast : Thomas Lennon, Ben Garant
Director : Robert Ben Garant
Synopsis
Reno 911!: Miami movie is based on Comedy Central's Reno 911!. The Reno Sheriff's Department hits the road for Miami to take part in a law enforcement convention. Dressed in the most bizarre assortment of 'civilian' clothes ever sported by off-duty officers, the gang of bumbling officers arrives in South Beach only to discover they're not registered for the event.

But thanks to that error, the Reno squad is the only police force not quarantined in a luxury hotel. That means that not only will they have to patrol the streets of Miami, they'll also have to try and figure out how to save their comrades-in-arms holed up inside the hotel with time running out.