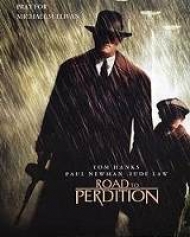 Adventure
Release Date : 2002 (India)
12 Jul 2002 (WorldWide)
Cast : Tom Hanks, Tyler Hoechlin
Director : Sam Mendes
Synopsis
Road to Perdition is a period drama film. Bonds of loyalty are put to the test when a hitman's son witnesses what his father does for a living. Mike Sullivan works as a hit man for crime boss John Rooney.

Sullivan views Rooney as a father figure. However after his son is witness to a killing he has done Mike Sullivan finds him self on the run trying to save the life of his son and at the same time looking for revenge on those who wronged him. Jude Law co stars as a hit man hired to kill Sullivan.