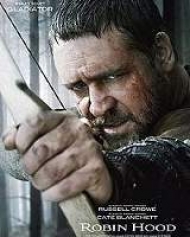 U/A | Action Drama
Release Date : 2010 (India)
11 Jun 2010 (WorldWide)
Cast : Russell Crowe, Cate Blanchett
Director : Ridley Scott
Synopsis
Robin Hood is a film based on the Robin Hood legend, directed by Ridley Scott and starring Russell Crowe. The story of how an archer in the service of King Richard the Lionheart became to be known as Robin Hood, the famous archer and outlaw of English Folklore.

Beginning after the Death of King Richard at the Siege of Chalus Chabrol, the film follows Robin on his rise to infamy among the English Barons and the newly crowned King John.

Featuring historically accurate characters such as Sir William Marshall and grounded in reality (in a similar way to Gladiator), this is not Robin Hood as you have seen him before, rather the making of the legend we have come to know him as now.