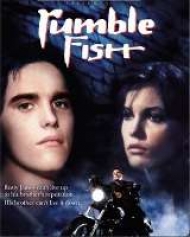 Drama
Release Date : 1983 (India)
21 Oct 1983 (WorldWide)
Cast : Matt Dillon, Mickey Rourke
Director : Francis Ford Coppola
Synopsis
Rumble Fish is a film directed, produced and co-written by Francis Ford Coppola. It is based on the novel Rumble Fish by S.E. Hinton, who also co-wrote the screenplay. Rusty James is the leader of a small, dying gang in an industrial town.

He lives in the shadow of the memory of his absent, older brother -- The Motorcycle Boy. His mother has left, his father drinks, school has no meaning for him and his relationships are shallow.

He is drawn into one more gang fight and the events that follow begin to change his life.

Rusty James is an up-and-coming street hoodlum, lamenting the salad days of the gangs when his older brother, The Motorcycle Boy, ran things as President of the Packers. Before disappearing two months earlier, Motorcycle Boy outlawed gang...