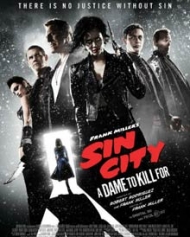 Sin City: A Dame To Kill For

Sin City: A Dame To Kill For Story

Sin City: A Dame to Kill For is an upcoming 2014 American crime thriller film and sequel to the 2005 film Sin City. Co-directed by Robert Rodriguez and Frank Miller, the script is written by Miller, and is primarily based on the second book in the Sin City series by Miller.
One of the smaller plots of the film is based on the short story "Just Another Saturday Night", which is collected in Booze, Broads, & Bullets, the sixth book in the comic series. Two original stories ("The Long Bad Night" and "Nancy's Last Dance") were created exclusively for the film written by Miller. Sin City: A Dame to Kill For was scheduled to be released on October 4, 2013 but was pushed back until August 22, 2014.
The film stars an ensemble cast including returning cast members Jessica Alba, Rosario Dawson, Jaime King, Jude Ciccolella, Powers Boothe, Mickey Rourke, and Bruce Willis. Newcomers to the series include Joseph Gordon-Levitt, Josh Brolin, Jamie Chung, Dennis Haysbert, Marton Csokas, Christopher Lloyd, Julia Garner, Juno Temple, Ray Liotta, Stacy Keach, Christopher Meloni, Alexa PenaVega, Lady Gaga, Jeremy Piven and Crystal McCahill.
Story
"Just Another Saturday Night"
After enviously watching John Hartigan reunite with Nancy Callahan in "That Yellow Bastard", Marv regains consciousness on a highway overlooking the Projects, surrounded by several dead young men, and is determined to remember how he got there.
"The Long Bad Night"
Johnny, a cocky gambler, disguises a darker mission to destroy the biggest villain in Sin City, Senator Roark, at his own game. He learns he beat the wrong man at poker and events take a turn for the worse, when the Senator has him brutally beaten.[8][9] Now scarred and lustful for revenge, his mission gets somewhat sidetracked, when he meets a young stripper named Marcy.[10][11]
"A Dame to Kill For"
Years before "The Big Fat Kill", Dwight McCarthy struggles with his inner demons and tries to maintain control until his former lover, Ava Lord, returns, wanting his help to escape her abusive husband, billionaire Damien Lord and his massive bodyguard Manute. A love-struck Dwight soon learns that Ava's true intentions are far more sinister than they appear.
"Nancy's Last Dance"
Set after "That Yellow Bastard", exotic dancer Nancy Callahan struggles to cope with John Hartigan's selfless suicide and is advised by him in her hallucinations. Driven insane and no longer a damsel in distress, the now black-haired and scarred Nancy is out for blood with friend and protector Marv, compelled to avenge Hartigan by hunting down Senator Roark.

Sin City: A Dame To Kill For Cast

Sin City: A Dame To Kill For Crew

Sin City: A Dame To Kill For Movie News

Sin City: A Dame To Kill For Movie User Review