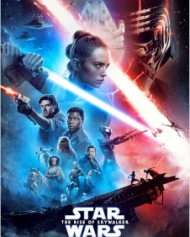 Star Wars: The Rise Of Skywalker

Sci - Fi
Release Date : 2019 (India)
20 Dec 2019 (WorldWide)
Cast : Carrie Fisher, Mark Hamill
Director : J. J. Abrams
Synopsis
Star Wars: The Rise of Skywalker starts a year after, The Last Jedi ended, where the Empire has lost to the Rebellion once again and is gathering more forces to raise another fleet. It's when an old formidable force comes to their aid, The Sith. On the other hand, Rey and the Rebellion are in their own search for allies to help them win the war over the Galaxy. Kylo Ren and Rey are forming a strong bond, which makes her wonder if she has the strength to not reach out for his hand, with visions of joining the Dark Side clouding her mind.