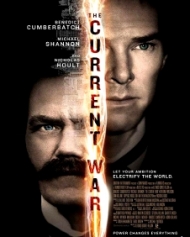 1 hrs 47 mins | Biography Documentary Drama
Release Date : 25 Oct 2019 (India)
25 Oct 2019 (WorldWide)
Cast : Benedict Cumberbatch, Michael Shannon
Director : Alfonso Gomez-Rejon
Synopsis
The Current War is an american historical drama film directed by Alfonso Gomez-Rejon. The movie is based on a true story and describes about the war of current between Thomas Edison and George Westinghouse. The famous hollywood actor Benedict Cumberbatch plays an Thomas Edison role in this movie, and cast includes Michael Shannon, Katherine Waterston and Tom Holland in main lead characters in the film.
This movie 'The Current War' has been bankrolled by the producer Timur Bekmambetov and Basil Iwanyk under the production banner of Bazelevs Company and Thunder Road Pictures. The Thomas Edison bio-movie was distributed by Lantern Entertainment. The music of the film was compossed by the Dustin O'Halloran and Hauschka.