The Woman in Black 2 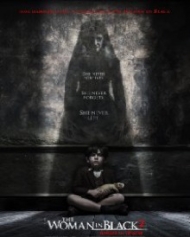 The Woman In Black 2

Horror
Release Date : 2015 (India)
02 Jan 2015 (WorldWide)
Cast : Phoebe Fox, Jeremy Irvine
Director : Tom Harper
Synopsis
The Woman in Black 2 is a British horror film, directed by Tom Harper and written by Jon Croker from a story by Susan Hill. t is the sequel to the 2012 film The Woman in Black, and is produced by Hammer Film Productions and Entertainment One.

As bombs rain down on London during the Blitz of World War II, a group of schoolchildren are evacuated with Eve, their young schoolteacher, to the safety of the British countryside. Taken to an old and empty estate, cut off by a causeway from the mainland, they are left at Eel Marsh House.

One by one, the children begin acting strangely and Eve, with the help of local military commander Harry, discovers that the group has awoken a dark force even more terrifying and evil than the city’s air raids....