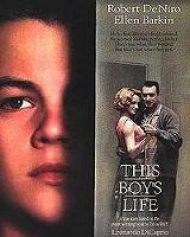 Biography
Release Date : 1993 (India)
03 Apr 1993 (WorldWide)
Cast : Robert De Niro, Ellen Barkin
Director : Michael Caton Jones
Synopsis
This Boy's Life is a 1993 film adaptation of the memoir of the same name by Tobias Wolff. Nomadic, flaky Caroline Wolff just wants to settle down in one place, find a decent guy, and provide a better home for her and her son, Toby.

When she moves to Seattle and meets the seemingly respectable Dwight Hansen (in real life Dwight Thompson worked as a mechanic for Seattle City Light at the time), she thinks she has got it made.

Toby, however, feels differently after Dwight's true personality is revealed after spending a few months with Dwight and his children away from Caroline. The boy's stepfather-to-be seems to want to mold Toby into a better person, but his method includes emotionally, verbally, and physically abusing the boy.

The marriage proceeds, and...