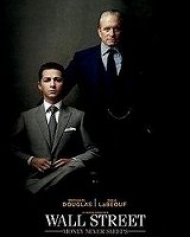 Despite his initial attempts to warn Wall Street of the forthcoming economic downturn and stock market crash, no one believes him due to his reduced standing in the financial world.

Gekko decides to re-focus his attention on rebuilding his relationship with his estranged daughter, Winnie. Due to their time apart, and the fact that Winnie blames Gekko for her brother Rudy's suicide, she avoids any contact with him.

At the same time, the mentor of young Wall Street trader Jacob...