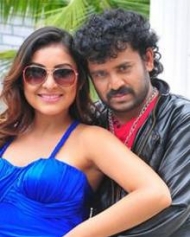 Pora story based on the real life happening of killing of Indians in Australia.
Amogh alias Janardhan director of Kannada films has picked international subject concerning Indians. Director and actor Amogh is shooting in Bangalore and Bidar in the final schedule. He plays a crime reporter role in this film.
Dr Girish Karnad, Raju Thalikote, Tabla Naani, Lucky Shanker, Sudharani, TS Nagabharna, Sumithra and others are in the cast.
Vylari plays main lead role in this film and She is daughter of a wealthy Home Minister played by Dr Girish Karnad in the film.