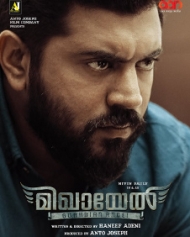 Crime Drama Thriller
Release Date : 18 Jan 2019
Cast : Nivin Pauly, Siddique
Director : Haneef Adeni
Synopsis
Mikhael is a 2019 Malayalam crime drama thriller movie, which has been written and directed by Haneef Adeni. The movie stars Nivin Pauly, Unni Mukundan and Manjima Mohan in the lead roles. From the teaser it's clear that the film be a stylish entertainer with emotional, mass and thrilling elements in the right proportions. Nivin Pauly looks in full form as the lead character and it seems like the film will be a sure shot hit at the box office. The story of Mikhael surrodunds around a character named Mike, who is a doctore by profession. A series of murders that happen. Is Mike connected to these murders? Mikhael takes us through this and much more.