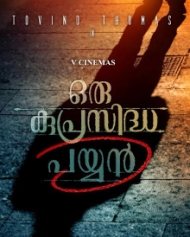 2 hrs 45 mins | Comedy Drama Thriller
Release Date : 09 Nov 2018
Cast : Tovino Thomas, Nimisha Sajayan
Director : Madhupal
Synopsis
Oru Kuprasidha Payyan is a 2018 Malayalam drama-thriller movie, which has been directed by Madhupal. The movie stars Tovino Thomas, Nimisha Sajayan and Anu Sithara in lead roles. The movie has its music done by Ouseppachan. Script work of the movie is by Jeevan Job Thomas. Noushad Shereef has wielded the camera for this movie. The story of Oru Kuprasidha Payyan revolves around a youngster named Ajayan, who is a loner and working in a restaurant of a village. Things turn upside down for him when he becomes the prime suspect in the murders of lady named Chembakammal, who is like a motherly figure to him. Who is the real culprit? Oru Kuprasidha Payyan takes the audiences through the same.