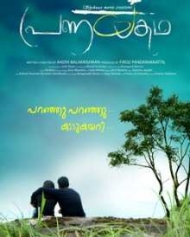 U | Romance
Release Date : 17 Jan 2014
Cast : Arun V Narayan, Swarna Thomas
Director : Aadhi Balakrishnan
Synopsis
Pranayakadha is a Romantic thriller which tells the story of some youngsters, who are living in the present society of Kerala.

Pranayakadha is an unusual story deals in an unusual way, says director Aadhi Balakrishnan. Anand and Saban who are MBA students and very close friends. Anand belongs to a middle Class family, while Saban is from a wealthy family.

Anand is in love with Ritha, who is doing her plus two. Knowing that...