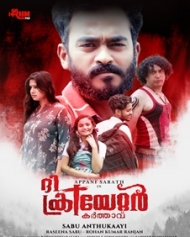 Drama
Release Date : 17 Jul 2021
Cast : Appani Sarath, Santhosh Keezhattoor
Director : Sabu Anthukaayi
Synopsis
The Creator is a drama movie directed by Sabu Anthukaayi. This is a story full of mystery and twist. In a village in Kerala, a famous professor woman(Rosemery) is molested by a man. And only that woman knows all about the murders that that person commits. The women hesitates to say this out of embarrassment. The woman is making a movie with the deputy director Sabu, who is trying to commit suicide, unable to direct a movie in the town.rosemary indirectly tells the story of the murderer.who is the killer at the end of the movie? Why those murders? Was the killer caught?.