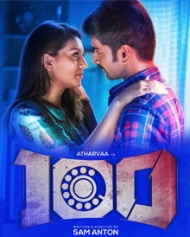 100 is a Tamil action crime thriller movie written and directed by Sam Anton. The movie features Atharvaa and Hansika Motwani in the lead roles, while Yogi Babu portrays a supporting role. The music for this movie composed by Sam C. S..
Story
Sathya (Atharvaa) a young cop, who works in a police control room, he used to interacts with the public and solves their issues with his full effort. Later, he gets a call from the kidnapped girl and he follows this mysterious case to find the girl. Did he find the girl? Is rest of the story to be watched on big screen.