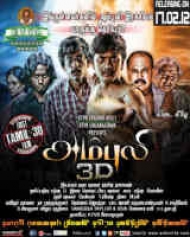 Posters of 'Ambuli' features Parthiban in a totally different getup. "It is an experimental film which is set in a new genre".