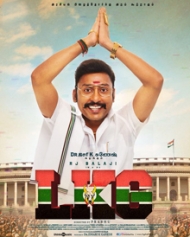 LKG is an Tamil political, comdey movie direction by Prabhu. The movie has RJ Balaji in the male lead role and Priya Anand in the female lead role, the movie cast also includes former politician Nanjil Sampath, who will be seen playing the role of Balaji's father. The director Prabhu is a associate of dance master, director Prabhu Deva. The movie LKG been produced by Isari Ganesh's Vels Film International. RJ Balaji has written the story and screenplay for the movie.
Story In Detail
Lalgudi Karupaiah Gandhi alias LKG (RJ Balaji) is shown to be chief minister of the present day who is all set to be sworn in for the position. The story begins from here when he gets shot and the flashback episode unfolds.
Hailing from a small town of Lalgudi, LKG starts his life as a councillor who aspires to become the Chief Minister of the state. Though one cannot pen down a sturdy storyline of the movie, it can be deemed as a lengthy video with a collection of satirical and hilarious political jibes. We do see LKG adoring Amaidhipadai Sathyaraj and Mudhalvan Raghuvaran. He doesn't stop there, he goes on and displays his admiration towards Vijay Mallya as well.
LKG wins the councillor seat through emotions and a superficial approach, which is far from idealism. His quest in politics continues even further where he employs a corporate firm headed by Priya Anand to assist him in gauging the public pulse and sentiments for his political journey.
This provides him visibility in the state-level political circles and helps him catch the eye of Bhojappan, the deputy CM who runs the state in the absence of the present CM who is hospitalized with a severe medical condition. These proceedings make LKG the talk of the town.
Soon after the passing away of the CM, Bhojappan fields LKG in the ex-CM's constituency and it comes to be a daunting task for the rising politician as he is pitted against Ramaraj Pandian (JK Ritheesh), the party's own member who is powerful and holds the constituency as his strong fort. What happens next? Is rest of the story to be watched on the big screen.
Crew
Era Murukan is a co-writer for this movie and penned dialogues for this movie. Pradeep Ranganathan penned for dialogues. Vidhu Ayyanna of Meyadhaa Maan-fame takes care of camera, while Leon James composes music and Anthony edits the movie. Vignesh Shivan and Pa Vijay penned for songs.
Release
The official trailer of the movie was released on 2 February 2019. The movie hit the screens from 22 February 2019. The film will also have its dubbed Kannada version release with the same title and the theatrical rights of the film in Karnataka were sold to ANK Films.