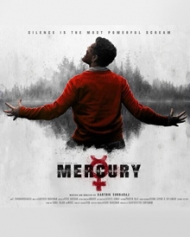 U | 1 hrs 48 mins | Thriller
Release Date : 20 Apr 2018
Cast : Prabhu Deva, Sananth Reddy
Director : Karthik Subbaraj
Synopsis
Mercury is an Tamil silent thriller movie written and directed by Karthik Subbaraj. The film is produced by Karthik Subbaraj’s production banner Stone Bench Films & Originals. The movie has Prabhu Deva and Sananth Reddy in the lead roles.
A long-time friends dumb and deaf reaches a hill station for together for their vacation. After enjoying their time together, they hit a man (Prabhu Deva) in trying to save a dog, while driving back to their room.
They decides to bury his body in nearby factory, but the accident victim starts reacting weird and wants them to killed. What happens next? Is rest of the story to be watched on big screen.