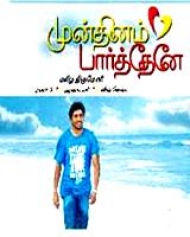 Mundhinam Partheney is a realistic story of romance between a software engineer and a dance exponent. The film’s tag line is: You can’t plan to fall in love, it just happens.