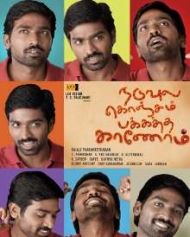 Naduvula Konjam Pakkatha Kaanom movie revolves around a young man who forgets a few days of his life, even as he is about to get married.