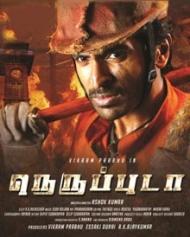 U | 2 hrs 14 mins | Action Drama Thriller
Release Date : 08 Sep 2017
Cast : Vikram Prabhu, Nikki Galrani
Director : B Ashok Kumar
Synopsis
Neruppu Da (aka) Neruppuda is an Tamil thriller drama movie written and directed by debutant B. Ashok Kumar. The movie Neruppu Da produced by Vikram Prabhu, it stars him in the lead role alongside Nikki Galrani.
The title of the film was taken from the popular song from Rajinikanth's Kabali (2016), with the team feeling that Vikram Prabhu's character as a firefighter and a Rajinikanth fan meant that the title would be apt.