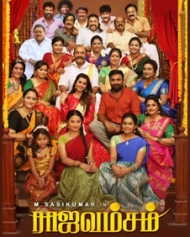 Raajavamsam is a Tamil action drama movie written and directed by debutant KV Kathirvelu. The movie star cast include M. Sasikumar, Nikki Galrani with a supporting cast including Radha Ravi, Yogi Babu, Sathish and Vijayakumar. The movie produced by Chendur Film International, music composed by Sam C. S.. The movie was edited by V. J. Sabu Joseph, and cinematography by Siddharth Ramaswamy.
Plot Line
The story ins about Kannan (Sasikumar) who works as a team leader in the IT industry, he as as challenges to complete a prestigious project for his company in thirty days and another is that his big family wants him to marry a girl.